‘You are nothing but a bastard!’

I will remember those six words for the rest of my life. Before that day, I never knew what that word meant. I don’t think I had ever heard it before. The diatribe that followed gave that first statement some meaning, but I still needed to ask what it meant. Bastard. a person whose parents were not married at the time that their child was born. It was meant to cause me pain. That, I understood. I was only 9 years-old.

I quickly learned that ‘special’ wasn’t what you wanted to be around other kids. Different wasn’t acceptable. And anything that set you apart was just fuel for your tormentor’s fire. They just wanted me to be a carbon-copy. Normal. Ordinary. And what they didn’t understand they hated. Which meant, they hated me. I went through chubby phases- strike one. I was often sick and missed school – strike two. And I didn’t look at all like the rest of my family -strike three. The list goes on, but you get the picture. Besides my best friend in elementary school, I was an outcast. 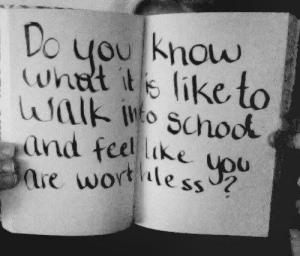 ‘Your mother hated you, that’s why she gave you away…’

It doesn’t matter what their names were. They were two ‘perfect’ girls, with perfect curls, and perfect shoes. They were the type of girls who wore root beer Lip Smackers and bows in their hair that matched their outfits. They had every scratch and sniff sticker I ever wanted, even the rare ones. Their birthday sleepovers were the most important social event of Grade 4. Everyone wanted to be friends with them. Everyone, including me.

‘You’re so fat and ugly, your own mom didn’t want you…’. They taunted and mocked me on the way home that day. I took a sharp left and away from their street, thinking there was no way they would take the long way home. They followed. I ran, but they chased after me. They laughed and threw rocks.

I hid behind a tall honeysuckle bush beside a white bungalow on the far corner of my street. I remember smelling their sweetness as I cried. I squeezed the nectar out of the paper-thin buds onto my finger and licked it away. The taste was salty sweet as it mixed with my tears.

I escaped in my mind, as the words became too painful. I pretended I was a powerful raven-haired spy on a classified mission, hiding from a villain. Playing these games were a distraction from how much it hurt. The girls finally got bored, cut through the alleyway, and headed towards home. I watched as their shadows moved further and further away until they were gone.

You bastard, I whispered softly to myself as I got the courage to come out of my hiding spot. I still didn’t really understand what that meant. But I knew not to expect an invitation to their birthday parties.

Your mom didn’t want you…. she hated you so much… It echoes in my mind, even now. And my heart breaks for the 9 year-old girl I once was.

2 thoughts on “It’s not all Unicorns and Sunbeams”